googlea482a744b173f0a4.html
Toggle menu
Use Contact Us for Messages and Enquiries

Only snippets of the early caravan industry remain today. Some of the earliest caravans were imported into Australia in the early 1900’s, like the automobiles that towed them.

The caravan has come a long way from its humble beginnings of a horse drawn wooden cart cloaked in a doped canvas cover.  Damp, cold and only providing the barest essentials for those living for the European climates they were used in.

It is purported that the first Australian Caravans commercially built were made by John Jennison in the early 1930’s constructed from board & clad with bondwood.  There is some conjecture who was the first commercial manufacturer in any event records show he was one of the first to patent his ideas for a pop top caravan. 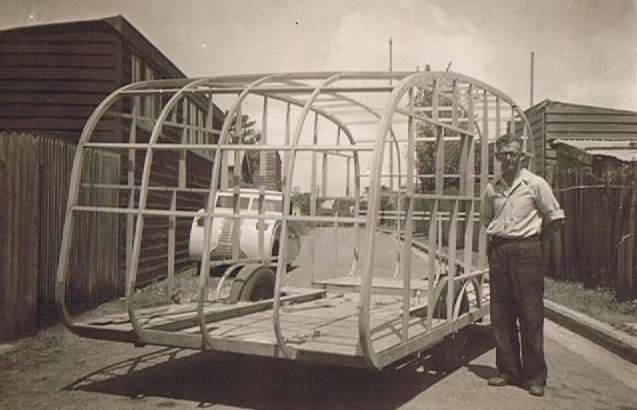 John Jennison standing beside the frame of a caravan in a lane at the back of what is thought to have been the Parraween Street factory, Sydney in the late 1930's

Early Australian designed and manufactured caravans were built to a basic, but functional standard.  As the caravan industry mostly employed skilled & master tradesman the quality of workmanship in the most cases was exceptional. Mass production methods for Australian caravans were decades away and caravan building went in to hiatus during the Second World War.

Some of the very early brands of the erra of the ‘big five’ were;  Millard,  Viscount, Franklin, Chesney and Coronet.

Throughout the 60's and 70's caravan manufacturers thrived on innovation and in the early years produced bondwood clad caravans moving into diamond shaped pressed silver aluminium and then white aluminium cladding that became an industry standard which is still used today.

The progression of materials used in caravan construction reflects the evolution of modern building materials.

As construction methods have evolved with the advent of new building materials so have caravans evolved to a space age craft of luxury, comfort and technology such as Bluetooth connectivity.

Has some of the practicality and quality been sacrificed in the rush to satisfy our need for our “castle” that can be taken anywhere?  Many of the innovative uses of nooks & crannies that were the feature of many early compact vans have been lost in our quest for unadulterated luxury.

The new breed of caravan owner appears to have become so technology reliant that they are unable to leave the bright lights of the city and immerse themselves in the solus of the bush without a 4G communications umbilical cord for security.

One has to wonder if our sophisticated technological lifestyle has made us less capable people to bare the trials encountered by the caravanner of yesteryear.

Back to Stories & Articles